I feel very fortunate to have been able to attend a day of training around being a better ally to the LGBT community today at GSK House. I thought I’d try to distill the day, though I’ll do a bad job of it - my key takeaway today was that anyone who feels they would like to be a better ally should do a number of things. In particular:

I’ll try to distil the day’s key activities and key learnings below - a lot of the content here is directly from the Stonewall slides. Any statistics reported below are direct from Stonewall also.

I want to offer my sincere thanks to Dilraj Sura, Jason Sloan and Annie Newman for the opportunity and the organisation of the day. I feel like I made an incredible connection to the subject, the people from GSK, and our colleagues from Diageo and Astra Zenica.

Warning: This post is not short - I’ve tried to share a whole day of learning. Please, if you have any questions, reach out to the Spectrum ERG group on workplace. There are so many people who want to help anyone interested in being the best ally they can be.

Although not exactly the same, the timeline presented at stonewall is indicative of the struggle that still exists in the community.

The figures are, as you can imagine, shocking - and there are many more - Stonewall publish a number of annual reports and it's really worth reading them.

It was also felt that we are “experiencing a rolling back of rights globally currently” which is incredibly worrying.

A CULTURE OF RESPECT

We talked about creating a safe and respectful place for the day, but these rules apply well to all of our conversations around the LGBT+ community:

A few key terms here - have “kind eyes and be a generous listener”.

If giving feedback, the UHT method was highlighted as useful (one I hadn't heard before):

We also talked about ‘Calling in’ vs. ‘Calling out’ - try to bring the person who is having issues into the conversation and engaging them, rather than publicly ‘calling out’.

We explored a number of terms and matched them up to their definitions:

There was a statement here that I hadn’t anticipated, and it blew my mind:

The LGBT+ community really have to consider in every context, in every new job, in every new social situation whether to be ‘authentic’ and come out if they haven’t done already. This level of consideration is terrifying as someone who aspires to allyship, but can’t possibly relate to the complexity of this.

One of the attendees talked about “Ethical Pragmatism” - assessing spaces as you enter them, assessing yourself in that space, and making a decision about how much you can share.

LGBT PEOPLE’S EXPERIENCES IN THE UK

These stats are tragic - as highlighted, this is just the tip of the iceberg - the links to the stonewall reports above really do give an even more broad set of figures:

This was incredibly powerful, and really helped me understand a little of what it’s like to be someone who wasn’t able to share everything of their life. Try it!

Spend a few minutes explaining what you did this past weekend. BUT

“I ran parkrun with one of my best friends and had coffee, then I had some drinks in the evening with my partner, then on sunday I had a family dinner”

It was impersonal, it was non-engaging, and it was VERY hard to focus on. People who are forced to cover their identity are doing this ALL THE TIME. The impact is easily quantified and measured (even if you only measure economic output).

The next exercise we talked about when we had felt included or not included. Ultimately, we talked about safety, being yourself, meaningful relationships, and talked about the impact of doing this in a non-inclusive environment with words like ‘bullying’, ‘wasted energy’, ‘isolation’, ‘fear of being outed’, ‘career development hindered’, etc.

The positive impacts, personally, culturally, and commercially were obvious to see.

WHEN HAS SOMEONE BEEN AN ALLY TO YOU?

I struggled with this one.

There were amazing tales from across the room, and my immediate thought was that of a cisgendered, white, male and an acute awareness of the privilege that has given me. I then recalled a time a few years ago when I had struggled with my mental health (a brush with significant depression and suicide) and the allyship I received from my team at work was pivotal. They checked in on me, they included me more actively, they checked on my spoon levels - ultimately, they created an environment where I didn’t need any time off work, and I felt utterly included and valued throughout.

I think there were a number of things in this, but key among them was the last point:

This was broken down into 3 categories:

It was highlighted that there are many facets to our identities - including (but not necessarily limited to): gender identity, nationality, trans status, race, class, gender expression, age, faith, sexual orientation, dis/ability

We mapped these our for ourselves, and I found personally:

This was powerful, and I've loved the works of Peggy McIntosh in this space (it was called out by the speakers too).

It really highlighted what privilege was for me (as did the Peggy McIntosh article). I’ve never been ridiculed at work because I’ve mentioned my partner, I’ve never felt victimised because of my religion, I’ve never felt unsafe to use toilets... these are all worrying norms in those with less privlege.

There were a number of things, but in recognising it, you will certainly see some of the below:

This one as complex - again given my stereotypical privilege, the first two parts to this were almost impossible to answer. I’ve not experienced a lack of privilege in the workplace in my memory.

I’ve certainly expreinced situations where I’ve had more privilege than others at work. A great example of this is my ‘Director’ job title - I often joke that it means I make a better cup of tea. It opens doors, it gets things actioned, and it’s utterly wrong that it does so. Calling people out on it is to want to change the organisational structure and hierarchy (which I do!).

I loved the way the day was broken down into 3 areas:

This area is pivotal - thinking and relating without acting puts us in the ‘passive’ ally role.

Please, when you're thinking about allyship, think about the 'ACTING' role - the LGBT+ community still benefits from passive allies, but active ones really maginify the voice. 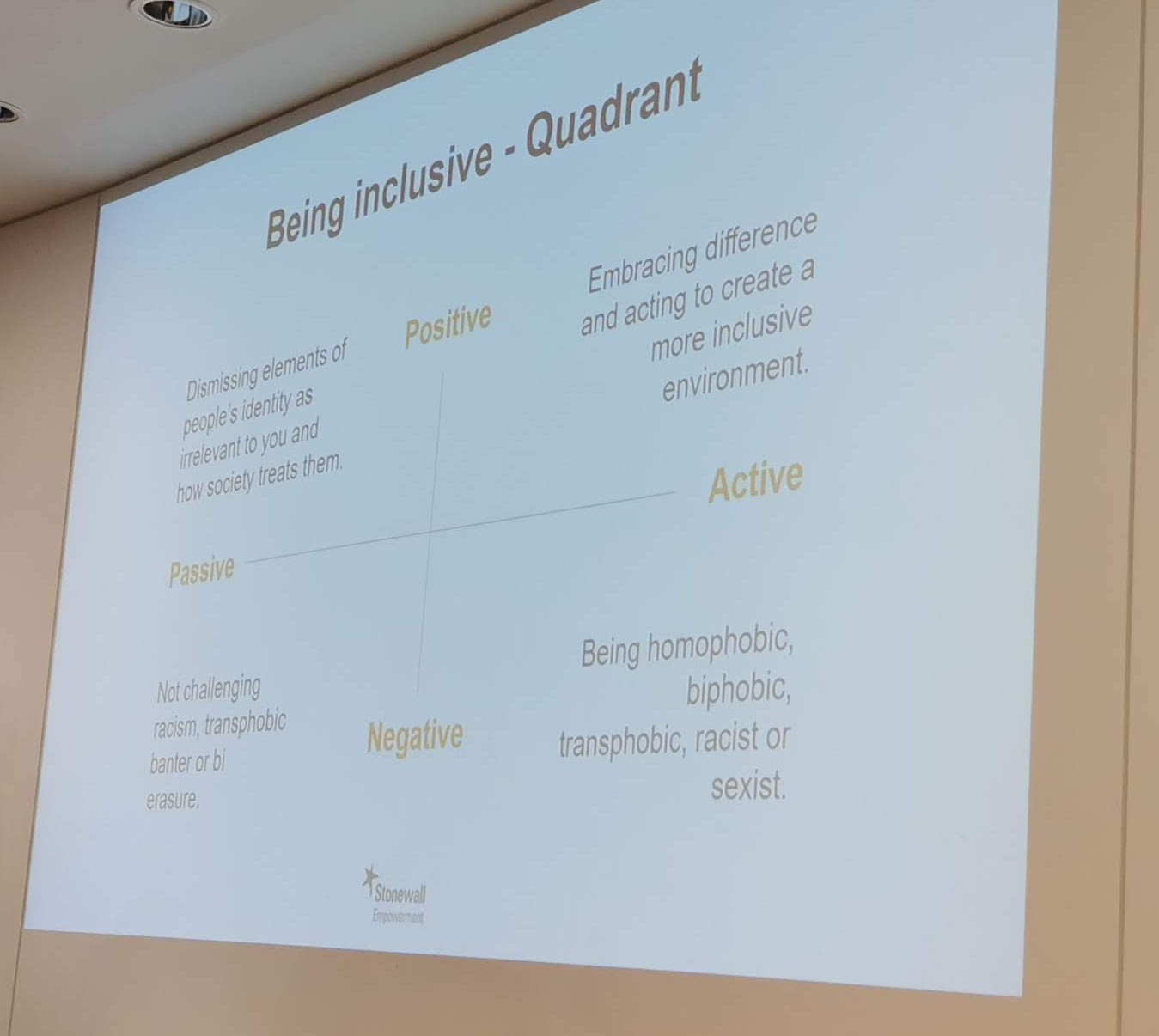 This was a grid of:

Naturally, being active/positive was key and that gave:

As you can imagine, the alternatives were:

As an inclusive ally, I am enthusiastic to leverage my privilege and the one thing I commit to is (more than one thing). I commit to do more, to share more, to speak more, and to listen more.

I will also reach out to see if Proud Science Alliance can find an effective sharing mechanism where we can all share good practice, learnings, etc.