This marks my second time at LeadDev London 2019, and you'll see from my tweet stream, I get somewhat enthusiastic. The conference was (if possible) even more inclusive, diverse, and welcoming this year - made even more so with it's positioning during pride month (Meri highlighted it was a fluke, though she also said that in previous years about bigger political upheavals that overlapped with the conference - I feel there are too many coincidences here! :)) 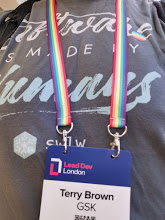 I have to call out the badge adornments. Upgrading to a pride lanyard, and giving both my communication preferences and pronouns on my badge was an awesome touch - I truly hope all conferences follow this model. This was only a drop in the ocean on the inclusivity though - a creche, an alcohol free room, a quiet room, a prayer room - so much to absolutely adore about the approach and care that is taken to looking after humans.

My leadership journey over the past 12months between LeadDev 2018 and this year has been an interesting one and has seen me move from an engineering lead in a relatively small company to one of the biggest global pharma companies. Lots of personal growth, lots of exposure, loads of challenges - it's been a blast.

This years' LeadDev for me was underpinned by a few core themes, and each resonated:

Some of the best talks for me that it's worth highlighting. I'll include links to the videos as soon as they're available.

Some great lessons based around Tuckman's stages of group development when navigating team friction, and some great references to emotional intelligence as a basis of communication (the amygdala hijack has had us all as it's slave for far too long!). Rarely is there a tiger in the room when we react badly to something - the classic conundrum demonstrated being the emotive subject of 'desk moves'! A great example followed, giving surgeons who perform the same procedure across multiple hospitals and perform it multiple times, yet performance only really ever seemed to rise significantly in the surgeons home hospital. The outcomes highlighting the importance of team interaction, trust, workflows etc. - performance is so much more than just hiring a group of “rockstars” and hoping for the best.

BICEPS
I loved the BICEPS model highlighted when looking at our core needs at work:

Feedback
I've followed Lara's 1:1 guidance for some time, and found the question around 'how do you like to receive feedback' really useful in all 1:1s with new staff. The model that Lara proposed for feedback feels similar to others I've seen, but immediately applicable.

Bottom up with OKRs

The best t-shirt of the day (and I was wearing my 'Software is Made by Humans' t-shirt!) - Whitney was wearing the amazing "Make tech more black" t-shirt! Any talk on Objectives and Key Results (OKRs) that starts with “Google got it wrong!” is going to grab anyones attention! This was an amazing talk, and I'd urge you to watch it. Challenging the status quo on a number of commonly held conceptions around OKRs and really made me think (and will absolutely generate discussion and change in our OKR process at work!)

Inclusion stars with I

I wish this had been a longer talk (it was one of the 10minute slots) - it was, as a middle aged, able bodied, CIS gendered white man, a revelation. I've felt lucky to have more chance to support and ally the LGBTQ+ community, but this talk really highlighted to me how much more I need to do across all of the inclusion and diversity spectrum. Tech can still be a hostile place. We have male dominated job descriptions, male dominated interview processes. Some people have to work 10 times as hard in tech to do well. FT release an I&D report that I shall be reading and trying to action my own improvements.

If you read this and feel that things like diversity quotas are anti-meritocratic, double check your privilege - you may well be part of the problem. There were, however, two problems highlighted with quotas:

Nine out of ten women still work in jobs where the men are paid more for the same job. I loved the quote: “Quotas may be the only way of achieving, eventually, a world where quotas are obsolete”. Paying lip service to diversity has to end - implementation is key.

Tech seems to be particularly bad for this - in a recent Stack Overflow survey it was highlighted that 34% said that diversity was their lowest priority when looking for a new job.
So many references flooded out at the end:

Ola Sitarska (@OlaSitarska)'s talk on an inclusive hiring process resonated a lot with the above and added some further context for me too and shouldn't go without mention.

I'm not even going to try to write this one up, but will update as soon as the video is out. I made so many scrambled notes, but it was awesome. If you facilitate anything in your working life, this had so much practical, tangible, actionable advice. How can a talk that mentions 'Post-It Super Sticky Portable Tabletop Easel Pad with Dry Erase Panel' be wrong? Honestly, watch it :)

To the end of day one story telling of Nickolas Means (@Nmeans) who gave us a thorough history of Eiffel's Tower, and tied it back to organisational politics and relationship building.

The end of day two saw the amazing Clare Sudbery (@ClareSudbery) and Dr Sal Fredenberg (@SalFreudenberg) talk about an incredible array of topics pivoting around a hackathon where they invented time travel... no, really! Watch it - both amazing speakers, and they delivered their content superbly. I learned of the spoon theory during this, and have already used it in defining my own energy levels in a conversation after 3 back to back days in London - loved it. Oh, and they came onto the stage to the amazing Polystyrene and X-Ray Spex 'Oh Bondage, Up Yours!' - what's not to love!